Bispecific antibody of different formats targeting CD3 and BCMA was developed by naïve antibody phage library. CD3xBCMA-bsAb, the most efficacious and practical bispecific antibody with a long half-life was obtained by flow cytometry. 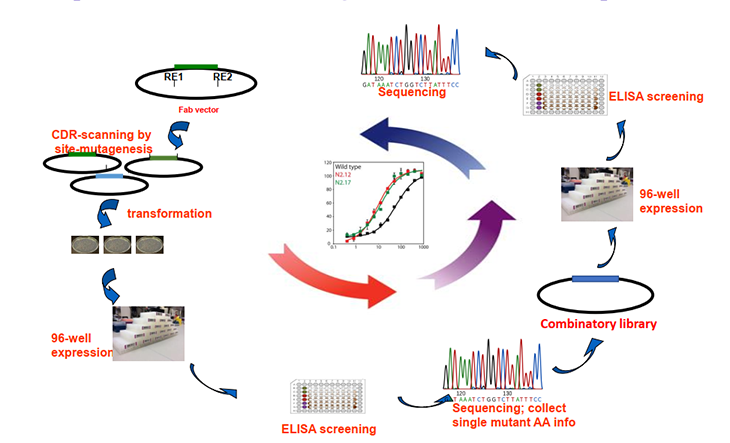 Multiple myeloma (MM), also known as myeloma, is a B cell-dependent hematological malignancy caused by excessive clonal proliferation of terminally differentiated plasma cells in bone marrow. MM is the second most common hematological malignancy, the first being non-Hodgkin’s lymphoma, although it is nonetheless a rare disorder, accounting for less than 2% of all cancers.

According to the Global Burden of Disease study, approximately 154,000 new cases of MM were diagnosed worldwide in 2015 and an estimated 101,100 deaths. MM is a highly treatable, albeit ultimately incurable, neoplastic disorder, so the goal is extended survival.

Current treatments include drug therapy (targeted therapy, immunomodulator, chemotherapy), radiation therapy, autologous bone marrow transplantation, and supportive care. Patients should be ideally treated on an individualized basis according to a risk-adapted approach that balances efficacy with potential side effects.

CD3 is a co-receptor expressed on the surface of T cells. The CD3 T cell receptor (TCR) complex plays a crucial role in T cell activation. B cell maturation antigen (BCMA) that exclusively expressed in the B cell lineage is especially highly expressed on MM cells and is considered a promising target for the MM treatment.

By binding the two antigens simultaneously, CD3xBCMA-bsAb can recognize MM cells and activate T-cells to facilitate an immune synapse. As a result, T cells are activated, leading to a variety of immune reactions, such as T cell proliferation, cytokine production, immune regulation, induction of MM cellular lysis, and MM cell elimination.

Multiple in vitro tests have been completed and in vivo tests, such as pharmacodynamics, toxicology, and pharmacokinetics studies, are soon to begin.