A novel pyrazole compound with new mechanism of action

Protheragen Inc. is actively seeking partnership for H-05. Potential collaboration can be strategic alliance, licensing, or other structures of marketing agreement.

Core Protein: A Keystone in the HBV Lifecycle

HBV is a 3.2-kb DNA virus that encodes 4 open reading frames and 7 proteins. Core protein, also known as HBcAg, is a 183-residue polypeptide chain. During HBV replication, messenger RNA (mRNA) is transcribed from the HBV core gene located on one of the four open reading frames of HBV. Translation starts with the second AUG on the core gene. Each protein monomer weighs 21.5 kDa. After folding and stabilization by the hydrophobic core, two individually folded core protein polypeptide chains will be joined, forming a dimer structure with a four-helix bundle.

The core protein is an important and attractive target for HBV therapeutic interventions because of its multiple and essential functions. It is responsible for multiple functions in viral replication and also contributes to viral persistence and hepatocarcinogenesis, such as nucleocapsid assembly, pre-genomic RNA encapsidation, reverse transcription, virion formation, closed circular DNA (cccDNA) amplification, immune response regulation, and HBx protein interaction.

H-05 possesses a unique chemical structure that is completely different from the reported type I and type II HBV capsid inhibitors. H-05 inhibits HBV replication by accelerating the formation of HBV empty (defective) capsid, so it is active against mutant viruses that are resistant to other capsid inhibitors.

The hepatitis B virus (HBV) belongs to the family of Hepadnaviridae, a group of oncogenic viruses that are capable of integrating their own DNA into the genome of the infected cell, thereby causing acute infection. Approximately 10% of infected adults will progress to having chronic hepatitis. The virus itself is not cytopathic to hepatocytes; rather, damage is caused by the host immune response. Chronic HBV infection is the leading cause of hepatocellular cancer (HCC), and primary liver cancer (75%-90% of which are HCC) is the second most common cause of cancer death worldwide.

HBV is among the most successful viral pathogens infecting humans. According to the Global Burden of Disease (GBD) study in 2015, the global prevalence of hepatitis B infection was estimated to be 356 million, including 12.8 million prevalent acute infections and 343.2 million prevalent chronic infections.

As infection is self-limiting in the vast majority of cases, antiviral therapy is indicated only in patients with protracted severe acute hepatitis or immune active chronic hepatitis. Ideally, the objective of treatment in chronic HBV is a complete viral eradication, but this is still an unmet need using existing drugs on the market.

The first cytoplasmic step in the formation of an infectious HBV is initiated by the association of the polymerase-bound pregenomic RNA (Pol-pgRNA) with three core protein dimers. The resulting complex forms a nucleus from which there is a rapid addition of single dimers forming the nucleocapsid. Within the viral nucleocapsid, the pgRNA is reverse transcribed by the polymerase to produce an incomplete double-stranded DNA with a relaxed circular conformation, referred to as the relaxed circular DNA (rcDNA). The capsid-containing rcDNA either can reshuttle to the nucleus to replenish covalently closed circular DNA (cccDNA) or can be enveloped to form infectious viral particles that are released from the cell.

HBV replication is in part regulated by the kinetics of assembly of the nucleocapsid particle. Capsid assembly modulators (CAMs) hasten the kinetics of the HBV nucleocapsid complex assembly and thereby prevent the encapsidation of the Pol-pgRNA composite and block the reverse transcription of the pgRNA. Different from the reported class I and class II HBV capsid inhibitors, H-05 binds to core protein to accelerate the formation of HBV empty (defective) capsid, thereby inhibiting HBV replication. 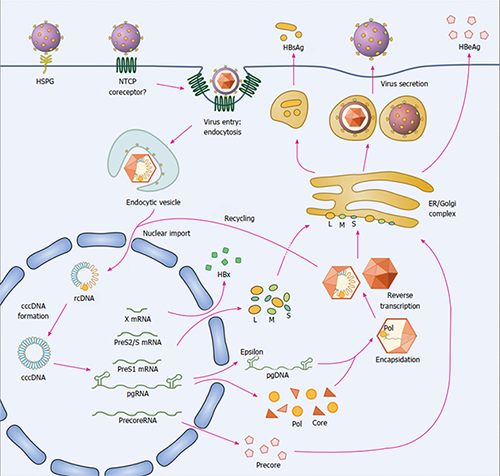 Phase I clinical trial is ongoing in the United States to evaluate the safety, tolerability, and pharmacokinetics of H-05. Preliminary results showed H-05 can be well tolerated and has the best exposure. Related patents cover China, US, EU, Japan, and S. Korea.

Please feel free to contact us for non-confidential data.